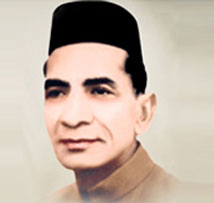 Lala Shri Ram was born on April 27, 1884. He joined DCM, when he was 25 years old. He possessed an analytical mind, and an infinite capacity for work, a knack for human relations. His view of business and perhaps of himself was put down by him in later years in rather revealing statements, "In my humble opinion, business is not merely a matter of attending work for a few hours. It is a matter of thinking, dreaming, imagining and working."

His election in 1930 at the age of 46 as president of FICCI was the first intimation of his national stature.

During his life, Lala Shri Ram’s main emphasis was on vocational, technical and women’s education. As far back in 1920, he had decided to conduct first experiment in vocation-oriented education by founding the Commercial Education Trust. The first school taken over by Commercial Education Trust was the Commercial High School. His Association with the Trust continued right upto the end of his life. The Commercial High School was raised in 1926 to the standard of an Intermediate College, in 1930 to a degree college and in 1934 to a post-graduate College.

In 1942, Lala Shri Ram became the Chairman of the Governing Body of the College. By the year 1948, although comparatively young among the colleges of Delhi University, the Commercial College had the maximum enrolment possible under the University rules. The College offered B.A. pass course and the B.A. honours course in Commerce and M.A. course in Economics and Commerce.

In 1949, it was proposed to rename the College as "Shri Ram College of Commerce" but it took three year to implement it due to initial resistance of Lala Shri Ram. Until 1949, the College was located at 8, Darya Ganj, New Delhi. In 1950, the proposal to shift the College to the University Enclave was accepted and implemented.

Lala Shri Ram’s association with the College continued till 1962, when because of failing health, he resigned. His health continued to deteriorate and he passed away on January 11, 1963.

On the death of Lala Shri Ram, Dr. S. Radhakrishnan, the then President of India said, He was not only a great industrialist but helped many good causes.