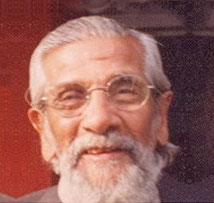 Dr. Bharat Ram (October 15, 1914 – July 11, 2007) was an Indian industrialist who built DCM. Mr. Bharat Ram hails from the renowned business family of Delhi, the owner of the famous Shri Ram Group and DCM with a legacy of more than 100 years beginning from his father Sir Lala Shri Ram.

Born in Delhi Ram graduated in Economics from St. Stephen’s College, Delhi. After his graduation, he joined Delhi Cloth and General Mills Co Ltd (now DCM Ltd) in 1935 as an apprentice and rose to the position of chairman and managing director in 1958. He had also set up Shri Ram Fertilizers.

Bharat Ram was the external face of the DCM group. He served on innumerable government committees and wrote two books: Glimpses of Industrial India and From Istanbul to Vienna. Coming from the capital’s premier business family, Bharat Ram was a respected public figure — the government even made him the chairman of Indian Airlines.

He is regarded as one of the most influential leaders of the Federation of Indian Chambers of Commerce and Industry, which he headed in 1965. (He had earlier been the president of the PHDCCI.) He also became the first Asian president of International Chamber of Commerce in 1969.